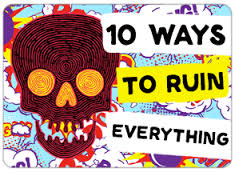 Dad’s Garage has taken another break from their improv standard to stage another scripted work. This one, by Perry Frost, deals with ten of the historical screw-ups in the history books. It doesn’t bother with stuff like George Dubbya building a sort-of wall part way across Mexico, or deciding to invest in Enron. But, she did dig up some adventures from the olden days, such as Napoleon’s pre-imitation of a current political candidate, the problems with visiting Typhoid Mary’s beanery and a sticky situation in Beantown back in 1919.

Amber Nash, Reuben Medina, Harriss Callahan, Whittney Millsap, Andre Castenell, Jr, and J. Hill take the stage in more roles than I could count. But, what do I know? The show, directed by Matt Horgan, is a series of ten vignettes which one may say restates much of what happened in those days of yore, but with some updated rhetoric.

There are really more than 20 of the members of Dad’s Garage who toil like serfs to bring this evening to you. OK, so if you are an AARP member you might have a wee bit of difficulty catching on to some of it. But, WTF, that’s what it’s all about. If you can’t accept life and laugh at it, can’t endure failure and keep plugging along, then maybe you’d be better off watching TV pundits discussing those clowns who are playing to you on a daily basis.

After their good years on Elizabeth Street and scrounging around for venues, it is good news that Dad’s Garage has found and adopted a new home which is a former chucrch on Ezzard Street which is easy to reach off of Edgewood near Little 5 Points. They even have directions on their website, with plenty more info about their antics. So just visit them at DadsGarage.com