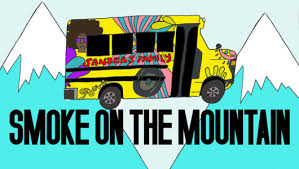 Smoke on the Mountain
Marietta Theatre in the Square
through March 19, 2017

The Sanders family has played around here quite a few times before.  Smoke on the Mountain is one of the 3 shows in which the strumming, singing, Bible thumping Sanders gang is featured and they have become standards, sort of like Nutcracker or Christmas Carol.

Pastor Oglethorpe is played by Zander Krenger, who is trying to manage his pulpit but has a little trouble keeping those Sanders singers in control.  The setting is a church in Mount Pleasant, NC.   The elder Vera is Anjil Jeter, and June is played by Liza Montgomery Maxwell.    Denise and Dennis are brought to life by Tiffany Searle and Bryan Smellie.  The gas station owner, Burl, is played by Xavier Gibson and Stanley, on the guitar, is Alexandra Gutierrez.

The show is basically a cabaret offering of 20, or more, gospel offerings; spiced with a bit of confusion, some humor, and some good ensemble playing and singing.  Some of the music is canned, but some is live on the keyboard and strings.

There really is no story here.   It’s a cabaret in a church in a small town.   And what ties it all together is the direction of Emil Thomas, who has brought the Theatre in the Square back to life in Marietta.

While the title is from Psalm 104:32, it may not be hip for many kids, nor for those who could be overly sensitive about portrayal of religion.   It certainly isn’t aimed at the intellectual elite nor the agnostics among us.  But, hey; this is Georgia.   So get yourself some boiled peanuts and pork rinds and enjoy a couple of hours at Theatre in the Square.

We all have to keep up with the arts, especially in these days.   What nicer way to help out than buying a ticket and enjoying a show.   And you get the show without all those pundits and politicians who get thrown at you every time you turn on that TV set.   And, they even have plenty of pickles for you, just as grown in Mt. Pleasant.

Info and tickets at TheatreInTheSquare.net

It was October 12, 1958, when The Temple on Peachtree Street was bombed and the explosion resonated throughout the nation.  For back in the 1950’s segregation was being made unlawful, albeit remained a common practice in many areas.  Blacks were mostly discriminated against in schools, restaurants, public transportation, and so much more.

Playwright Jimmy Maize delved deeply into the history of this event and others of like nature, to make certain that what was said was based upon facts.  For, as we know now, facts as stated aren’t necessarily always true.  Was a civil war against Jews about to start?   Were the Jews trying to take over the government and businesses of our area?

This is the final play to be staged at the Alliance, before it shuts down for a renovation in a few weeks.  Their season next year will be based on performances to be staged at several venues to be announced.

This play has 10 actors who come on in about 100 roles.  The leads are Caitlin O’Connell who plays Janice Rothschild, the wife of Rabbi Jacob Rothschild, played by Todd Weeks.   Janice is the narrator, while Rabbi Jacob is one who seeks to form acceptance and cooperation among persons of all faiths.    George Bright, who was the alleged bomber is played by Eric Mendenhall, and attorney Reuben Garland is played by Ric Reitz.

The show is directed by the playwright, and is a 90 minute one act production, designed to make one think of where things had been, how far we’ve come, and where we are these days 60 years on.   More info and tickets at AllianceTheatre.com 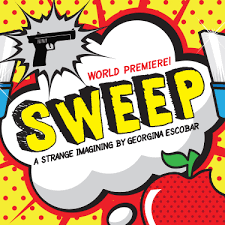 The Aurora in Lawrenceville is one of our local houses which plays to audiences of diverse cultural backgrounds.  This is the world premiere of a new work by Georgina Escobar, and it is defined as one brought to life by Latinx theatre folk.

The term Latinx refers to all people of Latin American heritage, be they teen or to elder, male or female, or any other diverse factor.  This highly energetic play is directed by Abigail Vega and is a one-act trip through time and space, dealing not with Latino issues, but with the relative needs and importance of different people.  It’s the playwright’s way of yelling out to pay attention to science, religion, sex, politics and more in the creation of the world as we know it.

The cast of five players take on ten roles.  Jasmine Renee Ellis and Candice McLellan are the leads, although each player has her/his time center stage as things go into orbit.  India S. Tyree, Cody Russell and Joshua Quinn complete the cast, which presents this play in the black box stage with a pretty stark set.

Yes, there is a lot of yelling, and the use of what we may now call Locker Room Talk, but they carry it off with great aplomb.  No, it is not for youngsters, Ms. Prim, or those whose feelings are that you should not confuse them with facts, as their minds are made up.

But, it is an experience unlike the usual theatre, and you can get more info and tickets at AuroraTheatre.com

In today’s world it is really great to find that we have local theaters acting in concert with one another as well as orchestrating new uses for their existing facilities.

For instance, two houses, Aurora and Theatrical Outfit, came together to co-produce In the Heights; and Lyric Theatre co-produced Million Dollar Quartet which will soon be playing at Georgia Ensemble in Roswell.

In addition to this kind of collaboration, which saves BIG on sets, props, costumes and other costs; we have houses bringing in special events that they don’t have to produce.

For instance, Libby Whittemore plays several times a year at Actor’s Express.  Her latest show for several nights was quite a treat, with four singers.  Libby was joined by Lisa Paige, Wendy Melkonian and Shawn Megorden and they appeared with Robert Strickland and his band on stage.  Libby will have her final gig at Actor’s Express for this season on June 15-18th with the Music of the 1940′s.  Easy to get to, and an easy cabaret style show.

And, Georgia Ensemble has teamed up with Joe Gransden and his Big Band for a series of four concerts a year.  The 16-man band was onstage there this week with their tribute to Ella, and singer Carmen Bradford wowed the full house with her stories and her songs.   Joe Gransden and the band will make their final appearance for this season one night only on April 10h when they will deliver up In The Mood, a tribute to the music of Glenn Miller.

These are all more entertaining than any politicians on the tube.