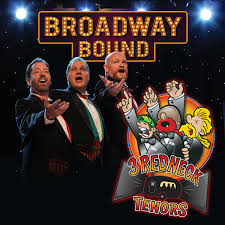 Three singers you may have seen on TV in America’s Got Talent, came to Conn county and hit the stage for two crowd pleasing performances at the Strand Theatre on the square. Matthew Lord, Blake Davidson and Jonathan Fruge started off in a style that wasn’t what one might have expected.

If you thought it was going to be Pavarotti, Domingo and Carreras; then you might have been taken aback. But, are they really rednecks? Not sure any of them actually grew up in the sticks. These three are come on like it’s Saturday Night Live, or the clowns have come to town. They belt out country, classical and gospel and anything else they feel like doing. And, not every song is exactly as you may have remembered it.

They enjoyed working the house and hearing the laughs as well as the applause. They perform to carefully canned numbers, and the sound levels are pretty high. I guess they want to make sure you don’t miss anything.

And referring to missing, these guys hit the road a lot. They told us they just finished a tour of 131 cities, of which they actually sang in two of them. Duh! But, in reality, they closed here on January 12, and on the 15th they play Savannah, 16th in Bainbridge, 17 in Americus, and then hit the road to Illinois. Not an easy job.

And next up at the Strand will be the musical you won’t want to miss. Middletown which runs February 18 -23, 2020. More info at EarlSmithStrand.org