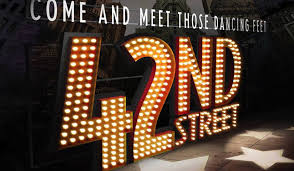 Let’s jump to the last line ……. go online or phone to get your tickets to this incredible first production of this new theatre company in Sandy Springs. If you have been to professional theaters on Broadway or in Shaftesbury Avenue, then you will be duly impressed at the quality of this production. It’s a true classic which opened on Broadway in 1980 and won the Tony for Best Musical. Then in 1984 opened in London on Drury Lane and won the Olivier Award.

Brandt Blocker both directed this show and is in the orchestra pit as conductor. The story line is based on a film of the same name dating from the 1930’s and the Great Depression. A producer wants to bring a show to the stage but runs into some problems, including the accident that prevents an egocentric prima donna from taking center stage. Producer Julian Marsh (Tony winner Shuler Hensley) is furious and ready to pull the plug; but the cast rises up and ready to do whatever is necessary to get this one on. They get the young first-timer, Peggy Sawyer (Leigh Ellen Jones), accepted to stand in for the injured star.

If you recall seeing the dancers at Radio City Music Hall, then this is kind of that sort of production. The choreography by Cindy Mora Reiser is awesome, and the cast of 30 players pour their hearts and souls into the show. You just want it to go on and on.

It is about eye candy and treats for the ears. Tunes you will hum along to are classics, such as We’re in the Money, Shuffle Off to Buffalo, Lullaby of Broadway and more. There is a live orchestra belting out the tunes, and the stage sets and costumes are totally first class.

This new facility is in Sandy Springs, just north of 285, and there is plenty of garage parking; and on street meters if you can get the stupid things to work. The theatre seats a little more than 1,000 and every seat has a clear view of the stage. Plenty of boxes available with movable seats as well. So get going . . . . more info and tickets at their website; CitySpringsTheatre.com