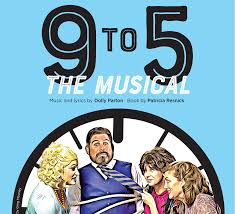 Get your tickets and get to see this one. It is one of the best that you can see right now. And Dolly Parton’s adaptation of the film, 9 to 5, has become a Broadway legend which to this day is probably playing somewhere every day. This musical, staged by Georgia Ensemble, is as we may say, . . Fabulous.

It is a story of women working for somebody who possibly could have become a President. He’s egocentric, undervalues women, and thinks he reigns supreme in all areas. But, he meets his downfall when the women come together and decide to take a Tony Soprano approach to resolving their dilemmas. It is soooooo relevant to current issues and activities.

Jill Hames is Violet, a supervisory female who is banging her head against a glass ceiling. They’ve just hired Judy (Wendy Melkonian) who has absolutely no business experience; but they’re going to make her fit in. Doralee (Alyssa Flowers) is the current object of affection for her boss, Franklin Hart, Jr. (Brian Kurlander) who is somewhat obnoxious in his moves. Eleven more players comprise the cast, and there’s an off-stage live band of five players headed by S. Renee Clark.

James Donadio directed, and there’s plenty of great dance choreographed by Jennifer Smiles. When they go to intermission you just can’t wait to get back and see how things work out. More info and tickets at GET.org