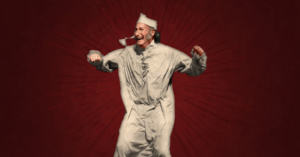 Ho, Ho, Ho . . . It’s back again, with Scrooge played to the hilt again by David DeVries, who now owns that role. He never fails to delight. Add to the mix the poor Mr. Fezziwig played once again by Bart Hansard, as well as Joe Knezevich, Andrew Benator, Thomas Neal Ghant and a cast total of more than 20 hard working players in many more roles, live music from Michael Fauss and his two associates, some great evil scenes, and the wonderful set by D. Martyn Bookwalter, and you have a truly incredible presentation.

What’s really incredible is that this production which had been done before at the Alliance home stage was being done again at the Cobb Energy Center, to a huge audience who are loving it soooo much. The production is once again directed by Rosemary Newcott.

Scrooge could be a poster boy for the non-caring greed which often seems to be prevalent in our society. I doubt it would be very moving for most of the politicians, bankers and lobbyists that we’ve had to listen to for the past few years. In the Victorian era Dickens was railing about the greed which permeated British society. People were sent to work houses and jails when they couldn’t pay a debt. Can recalling events of days past or seeing the unhappy future of persons other than one’s self really provide the epiphany for redemption? It does perhaps bring to mind the comments of George Santayana, who I’ve often quoted, who said “Those who cannot remember the past are condemned to repeat it.” How we see that coming true around the world on a daily basis. Just tune into the news. . . . So much of it as just pure Humbug.

There are some scary scenes, especially when the ghost of Christmas future comes to visit Ebenezer. So, if you are thinking of taking the wee ones, make sure it’s a story they know or could handle. Cobb Energy is right near 285 and 75 and easy to get to with plenty of garage parking, and every seat in the house has a good view.

And se we hope that the year to come shall be one of joy and health for every one. For show times and tickets just visit AllianceTheatre.org