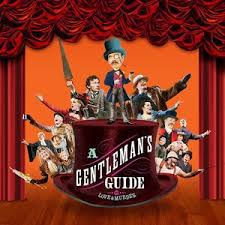 A Gentleman’s Guide to Love & Murder
Fox Theatre
through March 18, 2018

You’ve only got to this Sunday to catch up on A gentleman’s Guide to Love & Murder. It’s a show that won 4 Tony’s. It is based on a1907 novel, Israel Rank: The Autobiography of a Criminal. The show ran on Broadway for more than two years.
The book also was the basis for a film, Kind Hearts and Coronets in 1949.

It’s a musical farce comedy about a gent, Montague Navarro (Blake Price) who has learned that he is in line to become the Earl of Highhurst. The only problem is that he is 8th in line and can’t obtain the desired status unless and until those in line before him just happen to pass away. And that’s when he starts to figure out how he might help them do so, and as quickly as possible, as he wishes to marry.

James Taylor Odom, plays all eight of these would-be victims, as well as a 9th role; and the costume changes are incredibly fast. The stage is set at the D’Ysquith Manor in London around 1909. The 14 players pull this off with great aplomb, and go through 22 numbers with a live orchestra in the pit. This is a hard working touring company with choreography and direction by Peggy Hickey.

Opening night had some audio glitches and many folks lost some of the words, spoken and sung. But, by Act II, things improved and all came right. The score is good and the lyrics are funny. Sort of Sweeney Todd meets the D’Ysquith clan.

If you want to avoid the costly parking fees you can Marta to The Fox quite easily. But, know the show is a 7:30 curtain and there is security screening; so plan to get there earlier than usual.

You probably won’t leave humming or singing any of the numbers, but you will enjoy the dark comedy of the show. More info at FoxTheatre.org