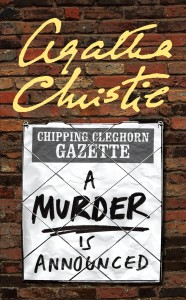 A Murder is Announced

It’s that scary time of the year when we all have to prepare for some ghastly events culminating on All Hallowed’s Eve. Agatha Christie didn’t necessarily connect this one to the pumpkin fest, but it is typical of her works, and just happens to occur at that time of the year.

Letitia Blacklock (Nancy Powell) is hosting some nice folks at her home in Chipping Cleghorn. The local Gazette newspaper has run a weird classified ad saying, “A murder is announced and will take place on Friday, October 29th, at Little Paddocks, at 6:30 p.m. Friends accept this, the only intimation.” So what’s this all about? The maid, Mitzi (Abra Thurmond) is deeply concerned and figures somebody is coming to kill her. She’s been through a lot before she escaped from Hungary and has her own version of PTSD. Letitia’s BFF, Bunny (Bobbie Elzey) has some concerns as well as all the others, except for Patrick (Trey Harrison) who seems to be primarily concerned with tending bar.

Miss Marple (Leslie Truman) come on scene and starts to think about what may be about to occur. But, nobody knows until the clock strikes, and then something else strikes out and somebody does wind up dead. But, who, and why, and how, and therein lies the play.

Inspector Craddock (J. Michael Carroll) is called in to investigate and he isn’t a huge fan of having Miss Marple intervene. But, he may wind up with her help, as she is a central figure in so many of Agatha Christie’s works. At the intermission you will find many in the audience contemplating and discussing the possibilities of who may have been the killer. But, they’ll be wrong; and that’s what is so cool about this sort of a plot. It has red herrings galore and most folks may have more than one persona.

Scott Rousseau designed the set and also directed the production. It is a typical Miss Marple story and all comes clear in the end, but not prior thereto for she see through things we may miss. Well done by a very good cast and very intriguing. For more info and tickets visit them at OnstageAtlanta.com