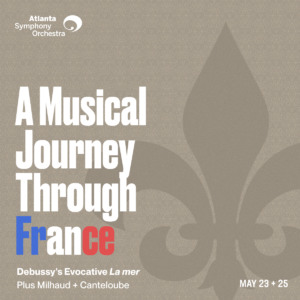 A Musical Journey Through France
Atlanta Symphony Orchestra
through May 25, 2019

Under the baton of Donald Runnicles, the ASO takes us on their musical journey through France. The concert quite naturally features Claude Debussy’s La Mer, which has been a classic standard for 100+ years.

The opening work is a name you won’t recognize, as it says in French, “The cow on the roof.” But, you will certainly recognize some of the often repeated bars which bring a sense of flamenco to the work by Darius Milhaud. He deliberately wove several Brazilian/Argentine dance segments into the work, and when they play the number his name will pop up in your mind, even though the name of the opus may not be widely known.

Soprano Kim-Lillian Strebel then comes to the stage to sing six numbers from Songs of the Auvergne, by Joseph Canteloube. She sings these somewhat randy numbers in the native dialect of that region of France, with English super-titles overhead. The Auvergne is a area in the south-central region of France, which is a bunch of small towns, hardly ever visited by tourists, who mainly hit on Paris and Provence areas. These are basically somewhat cute peasant numbers which you won’t learn the words to, nor leave the hall humming the tunes. But, she does a great job and it is a new experience for all.

After intermission the ASO delivers up two really good renditions of some of Debussy’s best known works. They do four excerpts from books 1 and 2 of Préludes and finish up with the high powered La mer, which delves deeply into Debussy’s love of the sea.

This concert closes Sunday and you can grab tickets by phone or online. Visit them at AtlantaSymphony.org