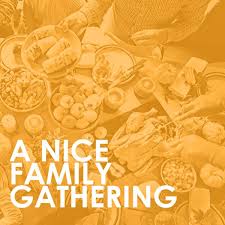 If you saw A Nice Family Christmas last year, then you will understand that this is the prequel, by Phil Olsen. Robert Egizio directed the cast of seven players, five of whom had appeared in the Christmas production.

This time the family is getting together for a Thanksgiving meal, and the mother (Dina Shadwell) is doing her best, albeit she seems to have lost a few of her marbles. Her son Carl (Erik Poger Abrahamsen) is trying to eke out a living as a journalist, but that isn’t providing much to live on, so his day job is driving a truck for the Pillsbury Doughboy. He sees himself as a loser, compared to his brother, Michael (Jeff K. Lester) who has become a doctor-a-doctor and has the prizes including a large home and his new MBW. He has a secret he hasn’t shared with the family as yet.

Michael’s wife, Jill (Alexandra Ficken), has some deep emotional issues relating to becoming a mother, and she reacts to many comments which may come from the mouths of the in-laws. And Stacey (Madison Welch) is the third sibling and is single, and she also has her secret which has yet to surface. There are two characters who push the others into a frenzy. One is the ghost of their Dad (James Baskin), who shows up to get Carl to do some of his bidding relating to some family issues. While Carl can see and hear the ghost, he is the only one that can do so.

Then things go awry when an old neighbor friend, Jerry (Rial Ellsworth), shows up on Turkey Day and the ghost of days gone by, goes bananas, and all hell breaks loose. But, this is a holiday show, so fear not; all comes out right in the end. If some of the characters seem as if they were drawn from real life, just think of your own family and how some days it is hard to put fun back into dysfunctional.

Stage Door Players is in Dunwoody, easy to get to with free parking and good seating. More info at StageDoorPlayers.net