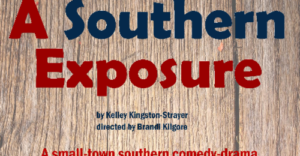 Lionheart is an all volunteer theater company just off the square in Norcross. And for a small company they do some really top grade jobs; and this is one of them. The play by Kelly Kingston-Strayer is about the core members of a family in Kentucky and what happens when the youngest one decides to hit the road to The Big Apple.

Brandi Kilgore directs the play which is staged on a really good set. There may not be a starring role, as every one of the four players is really superb. Three sisters who are getting on in age live in this small town. Merle Halliday Westbrook is center stage as the grandmother of the young lady, while Marla Krohn and Glory Hanna are a riot doing their schticks as church ladies, one of whom is losing some of her marbles, and aunts of Callie Belle, played by Katherine Waddell.

While there is a bit of underlying pathos, the show is a laugh-fest. Callie Belle is almost 30 and single. That alone is a problem for the older women. She falls for a man who is not of her family’s religious setting and that gets very distressing to them. Not only that, but she’s going to take off to NYC to live with the guy, who has not yet asked for her hand in marriage. Oy!

When that falls through she gets into another relationship with a doctor. Not sure if that is an MD or a PhD, but no matter. It’s all about the oldsters meeting and greeting the gentleman in the wings, and their assessment of the proposed relationship. Bottom line is a young woman tries to make a life for herself while trying to deal with three trying elders each of whom has her own standards.

The play is closing on the 29th, and is playing to sold out houses; so only chance to see this one is to show up and wait to see if somebody else fails to appear. Pretty rare for a local theatre company; but then these folks are really special.

So check into their website, so if you missed this one, you can try to catch the next one. LionheartTheatre.org