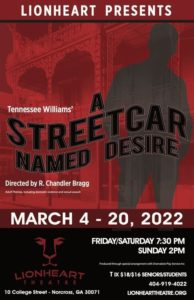 Tennessee Williams’ award winning opus is probably most famous for the film version in which you recall Marlon Brando screaming out “Stella” so often. It’s the trademark of the story; albeit there are instances of domestic violence and sexual assault. While it is a classic, is isn’t for the kiddies; but for the rest of us, it is a trip into the past so very well staged under the direction of R. Chandler Bragg.

Spencer Estes designed this wide open set for the two room apartment that the Kowalskis rented. It works really well, as lots of action moves from card games to arguments, to enticements and disappointments.

Lionheart is easy to get to just off Norcross Square, and quite comfy seating. They would love to have you attend the show and will even give you a treat if you do so. More info and tickets at LionHeartTheatre.org