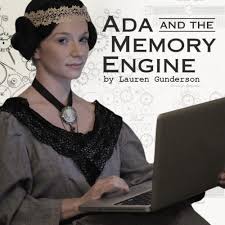 This is a truly incredible show which intellectually pulls you deeply into the plot as well as the characters you meet on stage. Playwright Lauren Gunderson has obviously done quite a bit of historical research and had to be as intrigued as were each of us in the audience.

The show is set in England in mid-nineteenth century. It is a tale being told of how the idea of a computer seemed to arrive. Lady Anabella Byron was the wife of Lord Byron, who was more than quite a bit of a rogue in his days. And their daughter, Ada had been abandoned by him when he flew the coop. Ada is played superbly by Ashley Anderson, and her mother, Anabella is played by Holly Stevenson. And this part of the story is based on historical fact.

Lady Anabella wants Ada to marry “properly”, ergo to someone of good name as well as good financial status. And to do so, she may have some problems as the sins of the father oft feel as if they are visited upon the offspring. Lady Anabella wants to hook her up with Lord Lovelace (Brandon Patrick) who may be a peer, but isn’t the chick magnet for Ada.

Ada has spent most of her years growing up learning about music and mathematics; and the M&Ms are of great importance to her. Enter Charles Babbage, played by Mark Cosby, and she is delving deeply into his theories as he wishes to design the first machine that can think its way through math problems. In fact, Charles Babbage was a real genius and his Difference Engine and Analytical Engine and others are considered to be a basis for the later development of those things with the typing pads that we all use today.

Ellen McQueen directed this marvelous cast, rounded out by Kathleen McManus and Evan Alex Cole as well as some prop extras who change the setting so easily. As you watch the show progress you start to recall the days of the huge room filling computers being programmed by punched cards, then later with huge reels of tapes; so long before those little chips that hold zillions more info.

If you were around when the computers started to take over the scene just 70 years ago, you’d think, as I did, that were Thomas J. Watson (founder of IBM, born 1874) alive and in the house he’d be diving head first into the story as well. For Ada became known as the first programmer as she and Charles got deeper into binary coding.

The show will run in repertory with G. M. Lupo’s Another Mother, at the West End Performing Arts Center on Ralph David Abernathy Blvd. You can get more info and check performance dates at EssentialTheatre.com