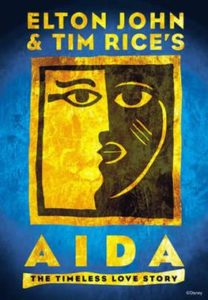 Elton John and Tim Rice’s AIDA is a work developed for Disney by their team and derived from the opera by Guiseppe Verdi. When it opened on Broadway in 2000 it won many awards and had a four year run.

The story is about the princess, Aida (India Tyree), a Nubian who is taken prisoner along with many of her people when attacked by the Egyptian army under the command of Radames (Haden Rider) who is heir to the throne of the Pharaoh (Matthew Morris) and engaged for many years to be wed to Amneris (Lauren Hill). You won’t find Nubia on the maps today, but it lies in the southern Nile area twixt Egypt and Sudan.

When Aida is brought to Cairo, she comes to meet up one Nubian who figures out who she really is. That’s Mereb (George Roberts) who is sworn to secrecy to prevent her from being quickly disposed of. Prime Minister Zoser (Chistopher Kent), the father of Radames, is scheming to get rid of Pharaoh and get his son on the throne. All hell breaks loose when more Nubians are captured including the Nubian King Amonasro (Brian Jordan, Jr.) and a situation develops between Radames and Aida; and they must figure out what best serves their real interests. As you probably know, this is not one of those tales in which all comes out right in the end.

A team of 20 players under the direction of Taylor Buice do a great and highly energetic job, with some fine choreography by Bubba Carr. If you have seen it before, you’ll see it again in a good production. But, if you are there for the first time, know that while it is captivating and draws you in, it is not Cats, Les Miz, or Phantom. The score of more than 20 numbers may not be ones you’ll immediately recall if heard without lyrics. But, it is another good offering from this really good musical theatre in Marietta.

Free parking, good seating, easy to get to. More info at AtlantaLyric.com