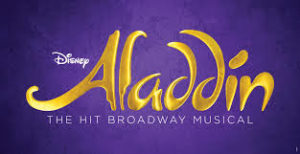 Take Disney’s film, add some incredible costumes, great music and sets that will blow you away, and it’s no surprise that this one did win a Tony and the touring company is selling out performances in many venues.

So maybe the story is an oldie, but this is a VERY updated version in song, dance and dialogue. Trevor Dion Nicholas brings down the house as the Genie who has to come up with the answers to three wishes, and has one of his own that he may or may not get to use. Clinton Greenspan is Aladdin, a street busker, hustler and petty thief just trying to get by.

As you know, he does meet and fall for a princess, Jasmine (Lissa DeGuzman), who is under a load of pressure to marry within her social circle. And the story is about how the street guy tries to pass himself off as some prince, and how he finally has to own up, and how everything comes out alright in the end. Of course there is an evil character, Jafar (Jonathan Weir) who will stop at nothing to gain access to the throne. His aide, Iago (Jay Paranada) is a comedic sort who comes off like an aide to an elected politician you may know of.

The sets and props are like a trip to Disneyland, and the live orchestra in the pit moves the action along. There is total eye candy in the costumes, sets and choreography; and no matter what you may think the show will deliver, it will far surpass your expectations.