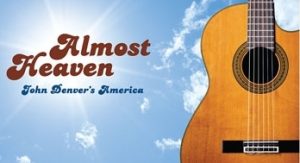 Once upon a time there was a young man named Henry John Deutschendorf, Jr. He was born in 1943 and was raised as a military kid, moving from one base to another around the country. Along the way he learned to play the guitar, and sing. He also composed most the numbers he performed, writing over 200 works in his career. He hit the big time in the 1960-1970 era with numbers such as Rocky Mountain High, and others that made him famous. And, along the way he changed his name to John Denver and that is how he was known.

This work directed by Robert J. Farley is not so much a play as a cabaret concert. The five man group includes Dolph Amick, Molly Coyne, Chris Damiano, Scott DePoy and Jeremy Wood. It’s cool in that each of the players doubles on 2 or more instruments, while Molly Coyne adds some bells and tambour hits.

The performance is a series of songs originally performed by John Denver, which are presented along with the various performers each coming on as John Denver remembering his life. The story, if you can call it that, does deal with his youth, his 14 year marriage to Anne, the divorce, and the subsequent brief marriage.

If you are a Denver fan and know how he died in 1997, then you would know that he was an aviator who loved to fly his own aircraft. He owned several planes, including a Lear Jet which he used when going on tour. He also had a little problem with hooch, and as a result his license had been restricted by the FAA. It was during that period that he was flying a Rutan-Long EZ two-seater off the California coast, when he went down for the last time. It might be thought of as a sad ending; but the flip side of the coin is that he cashed out doing something he loved to do.

The show’s title comes from his gold record hit, Take Me Home, Country Roads; and after his passing it became the State Anthem of West Virginia.

The show is being produced in the open on stage at Chattahoochee Nature Center in Roswell. There have picnic tables and chairs under cover, or you may elect to just go with sitting on the lawn and bringing your own blankets and chairs. For performance times, tickets and more info visit GET.org