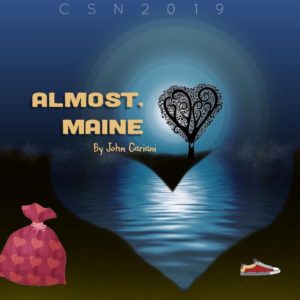 Actor and playwright John Cariani grew up in New England, and when he was a youngster his family moved up to Presque Isle, Maine; a small town way up in the northeast corner of Maine. And when he invented Almost, Maine it was because he wrote of a little village that never incorporated into a town or city and had no actual government, save the State of Maine. It is almost in Quebec Province. So the almost town was said to be Almost.

The play is a series of 9 vignettes of some somewhat strange couples in this almost town. Each role is played by a different actor, so this has a huge cast for such a small stage theatre. When you add in the waitress at the Moose Paddy pub you wind up with 19 in the cast.

Julie Taliaferro directed this tale of life in the arctic cold, when many folks sought love in many different ways. It is deemed to all have taken place in just a few minutes of time on a freezing Friday night. It’s interesting that when this was first staged it was 15 years ago in Portland, Maine; which itself is not quite tropical, even though the lobsters are great.

This is a well done show at an all volunteer theatre in Cobb County. Easy to get to with free parking and good view from any seat. More info and tickets at CenterStageNorth.com