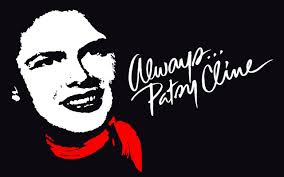 The true story of Patsy Cline has been around quite a while, but hasn’t loss a spot of impact to this day. This show, conceived by Ted Swindley deals with the small town gal who rises to stardom, yet has a fairly brief stay there.

Directed by Mary Nye Bennett with a live six man band on stage, the show moves along as Patsy, sung by Laura Hodos, takes us for the ride on her Honky Tonk Merry-Go-Round, and through another two dozen numbers, each of which has become a standard oldie.

You’ve listened many times to I Fall to Pieces, Your Cheatin’ Heart, Crazy and others, and they’re still as good as when she first did them. Laura Hodos “owns” the role and has played it for some year in many venues. Even if you’ve seen the single performer cabaret version of Patsy Cline, this one also brings in her BFF, Louise Seger, played by Karen Howell. She’s another good ole gal, and Patsy was the highlight of her life.

Both of these actors are top class and the show moves along with great ease and pleasure.

Alas, Patsy Cline passed away at an early age in an airplane crash. But, her memories and talents will live on. This is a VERY entertaining couple of hours and everyone in the audience had a great time.