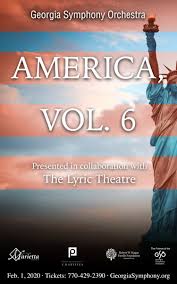 The GSO continues it’s series of concerts in which America is a focal point in the music and the stories behind them. This production at the Marietta Performing Arts Center was a totally awe inspiring one, unlike any usual concert.

The composers are all Americans. They opened with Leonard Bernstein’s Overture to Candide, which is a totally energetic opus in every respect. Then they presented Lowell Liebermann’s Concerto for Flute and Orchestra. The composer is comfortable in any genre, be it opera, chamber music, full symphony, and so much more.

His concerto is quite a bit more than you expect, for as it moves through the usual three movements, the final one is pretty upbeat with a lot more than just the strings. Flautist Jeanne Carere was stage center and really carried the audience away.

After a break, the GSO, in collaboration with The Lyric Theatre, presented an unique work by Peter Boyer. His Ellis Island: The Dream of America, premiered in 2003 with the composer conducting the London Philharmonia Orchestra, and has gone on to become a staple today for orchestras around the world. As the orchestra plays the numbers, actors come to the stage as seven different immigrants who came to this country many years ago when they were stowed away on ships that took many days to cross the Atlantic to the Statue of Liberty and the process of gaining access and so often to reunite with family which came before them. In addition to the narratives from Jennifer Alice Acker, Chase Davidson, Cara Mantella and Michael Vine, there are photo backdrops from the archives of Ellis Island. And, if we stop to think about it; while we may not actually know of relatives arriving there, it was the principal port of entry for those emigrating from Europe to seek a better life in the land of opportunity. If you like Aaron Copland’s works, you’ll love this one.

The GSO under the baton of Timothy Verville is an incredible credit to our growing arts community, and it also shines as a first class orchestra with a really impressive number of female players, not all on violins or the harp. Coming up February 8th is the GSO Jazz band and chorus which will perform their America vol. 7 at the Strand Theatre on Marietta Square. More info at GeorgiaSymphony.org