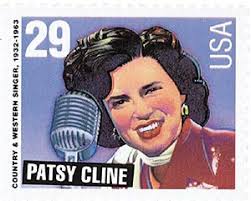 An Evening with Patsy Cline
Art Station
through April 15, 2018

Georgia native, Michelle Martin, takes to the stage in a cabaret performance delivering up all the great standards of Patsy Cline. The show runs in two acts, with the first being staged at the Ryman Auditorium in Nashville, the original home of the Grand Ole Opry.

She’s been singing Patsy Cline’s numbers for many years and has quite a following. Together with three musicians backing her up onstage, she goes through maybe 25 or more numbers, which excite the crowd enough they keep yelling for encores when the show ends. The second act is being done as if she is working on the road and leading up to 1963 in Kansas City. She was a star, and it was such a sad event when at age 30 she died in a small plane accident in Camden, TN.

With Jonathan Mills on the drums, Mark Sims on bass, and Patrick Hutchison on the keys, they all play every number without a score, and Michelle does every number as if she were the real Patsy Cline. Saturday evening saw Jordan Manley sitting in on the drums, and he was also quite a treat.

The Art Station is easy to get to in Historic Stone Mountain area, with plenty of eateries nearby. More info at ArtStation.org