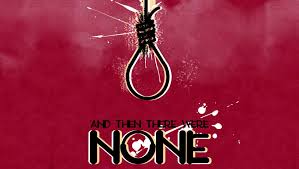 And Then There Were None
Act3 Productions
through February 25, 2017

We all know that Agatha Christie wrote great mysteries, but this is one from 1939 that she described as one of her most difficult ones.  For in this one we don’t have one victim and several suspects which get revealed in the final scene.  Here we have ten potential victims, each of whom is a suspect and they all go in different manners.

The story is told using a children’s poem about Ten Little Indians (in this case Soldiers) who die off one at a time.  It’s a riot how these little dolls on a mantle just seem to disappear on cue.

Each of the main characters has been invited to an estate on an island off the coast of Dover, England.  None of them seem to know any others, and the alleged host never does appear.  The victim guests are left to delve into each others past, and reasons for being there, as things go badly one after another.  Toby Smallwood and Jessica Hiner play the butler and maid, who are among the early victims.  Emma Green is Vera, who is the first to show up and is a new secretary to the owner whom she has never met.  Gwyndion Calder is a gent who has a secret that comes out in Act II, and Alex Burcar is the young chap who is the first to get offed.

Paul Milliken is a copper who at first is under and assumed name, as he supposedly has been brought there to spy on the others.  Gisele Frame is the Ms. Prim who gets in everybody’s nose when she opens her mouth, and James Conner and Clay Johnson, who is an egotistic Justice, are two more gents with secrets in their past.  A female doctor who comes under a lot of suspicion is Alisha Boley.  And Joshua Herndon comes on in the opening scene as a chap who delivers up the food from the mainland so that these guests can dine.

Directed by Amy Cain Lucas, the set works very well, and you are drawn in as the plot seems to unveil, when it really is just messing with you.  You’ll be sitting there thinking through the actions and figuring out who gets to die next, and at whose hands.  Relax.  You’re wrong, my friend.  The show runs about 2.5 hours in 3 acts, and unless you’ve read the story or seen the play, you’ll be a bit surprised at the results.  Nobody and no thing is what it seems.  Sort of like a company of politicians, no?

Act3 is in Sandy Springs right behind Trader Joe’s, with plenty of free parking, and easy seating.  More info and tickets at Act3Productions.org