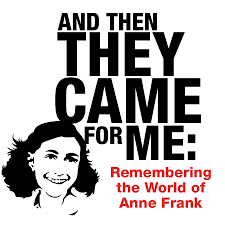 And Then They Came for Me
Georgia Ensemble Theatre
coming only March 10, 2019

This production by Georgia Ensemble has played for 22 years and been seen by an audience of more than 500,000 viewers. The play by James Still is based on Eva’s Story, the memoir of Eva Schloss; who was a friend of Anne Frank during the holocaust. Eva Schloss is a Holocaust survivor, peace activist, teacher and a humanitarian, who became Anne Frank’s step-sister who wrote the book “The Diary of Anne Frank”.

The play, directed by Erin Bushko runs about one hour and is staged with five players and projected images. For those of us, of a certain age, the story of the Nazi atrocities in WWII can never be fully eradicated from our memories; no matter how many may wish to revise the history of those years. For, as George Santayana opined in 1896,  “Those who cannot remember the past are condemned to repeat it.”

Anne Frank is played by Dayanari Umaña and Alex Renée Hubbard is Eva. Amy L. Levin and Jacob Jones appear as family members and acquaintances; while Christopher Holton has the cajones to come on as a Hitler Youth member as well as several other roles. It can’t be easy to present one’s self in such a role.

We do have a problem in our nation, inasmuch as many students are taught very little history and/or geography. And, when we think of what is going on in our nation and our world in these days, we need to consider where and how things may develop.

The final one-night performance for this Family Stage Series event will be at their Roswell location on March 10th, and I encourage anyone who has not seen it to attend. If you know very little of the background, you will learn more. If you recall quite a bit of the background, you will be pleased to see that the show, in cooperation with the Georgia Commission on the Holocaust, is keeping the history alive.