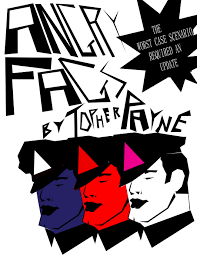 Local genius playwright, Topher Payne, had started this one some years ago, but this is a premiere of the updated version, as he deals with social and political problems of our nation which isn’t getting so great again, very quickly. As the French would say, The more things change, the more they stay the same.

Directed by Kate Donadio MacQueen in association with Ibi Owolabi, the cast of 7 players come on with gusto. Bennett (Gregory Hernandez) has split with his significant other and moved in with Cooper (Cody Russell). The time is after Potus is out of office, bu things aren’t idyllic yet. Cooper is doing PR for a gay senator.

When Bennett’s ex, gets brutally assaulted at a gay bar, the attack can’t be classified as a hate crime. Couldn’t be “hate” just because Adam is not black; he’s just another fag.

Bennett is doing speech writing and PR for a Georgia senator. Adam (Brandon Patrick) is Chief of Staff for a senator. Allison Haines (Gina Rickicki) is the only lesbian senator and Peggy Musgrove (Paris Starter) is her black Republican nemesis. And Kimberly Phillip (Kelly Chris) is a politicians office manager.

All hell breaks loose when Brandon’s roomie, Cooper (Cody Russell) goes off the deep end. Time for gays to take up arms in their revolution. What? Gays taking the offensive against those who discredit them? Who could conceive of such a thing? But, . . . when you think about it, in this insane society in which we live, could this sort of thing be ruled out. No way, Jose.

While there is a lot of humor in the first half of the play, there is a lot of riotous angst towards the end. It is not for Ms. Prim or the tots, as there are explosions, yelling and the use of the F-word as the universal modifier. But, for the rest of us it is quite a couple of hours of fine acting that moves us to put our brains in running mode. More info at 7Stages.org