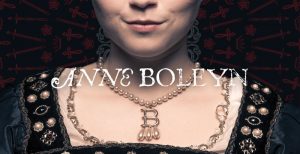 Playwright Howard Brenton takes us back to the days of King James when he goes in search of trying to find out what really went on with Henry VIII and Anne Boleyn when she became his 2nd queen. The ghost of Anne Boleyn takes us back years to the entanglement among Cardinal Wolsey, Thomas Cromwell and the reformation participants.

You may recall from school days how Henry had six wives. In order they are said to have divorced, beheaded, survived, died, beheaded, survived. Henry was immersed in trying to cast off his first wife so that he might wed Anne Boleyn. But it was the days of the Catholic Church as the state church of England. The Pope wasn’t inclined to grant an annulment, so what’s a monarch to do? With the advice of some supporters he accepts the idea that since he is king of England, he should serve as chief executive of the church in England, not a Pope sitting in a foreign country.

And so the story winds around as Wolsey and Cromwell try to undercut one another. We also get to meet William Tyndale who had translated a lot of the old testament to an English version. He never really finished the job and he lost his head as well. And this was before the King James version some years later.

A cast of ten high energy players, appear in 24 roles. Brooke Owens is Anne, and both Kings, Henry VIII and James I are played by Brian Hatch. Under the direction of Richard Garner, the players are in spot-on costumes as we’re used to in Shakespearian productions.

While we may know the outcome of Anne’s 3-year marriage, we may not have recalled that Henry was so bereft at her death that he waited an entire day before marrying Jane Seymour, in the hope that she’d bring a male heir into his empire.

It is a very well done production in a comfortable venue that is easy to get you, with plenty of adjacent parking. The location is right on Peachtree in the Invesco Building. More info available online at syncrotheatre.com