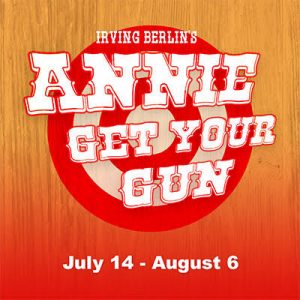 Annie Get Your Gun
Stage Door Players
through August 6, 2017

Irving Berlin’s classic Annie Get Your Gun is always a delight to the eyes and ears. Directed by Robert Egizio the cast of 17 energetic players delivers up about 18 classic standard numbers such as There’s No Business Like Show Business, and You Can’t Get a Man with a Gun.”

The show is done pretty much cabaret style on an open stage with some changeable backdrops; for the music and dance is the stuff of the story. Annie Oakley is played by Paige Mattox, and Michael L. Pugh is Buffalo Bill Cody. And, George Devours struts his stuff as Sitting Bull, while Bryant Smith, as Frank Butler woos Annie. There were some slight tweaks to update the script a bit, but the story is the same.

The competing shows aren’t doing so well, as the performers try to get the upper hand. As they both seem to be failing, maybe it would be better if they could join forces. But, there’s always that little problem of who is the better shot; and as between Annie and Frank, trying to figure out who can do something better than the other.

The costumes and props are neat, and the choral singing and dance numbers are just a delightful dose of eye candy. It’s a pleasure to sit through a happy tunes musical where nobody gets killed.

A very good production in a very comfortable venue; and selling out fast. More info at StageDoorPlayers.net