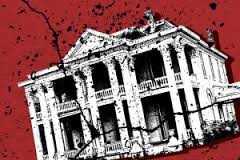 I’m not certain if all the shows about dysfunctional families are coming forth as a reflection of all the political poppycock being generated; or as a result of the creative sorts taking a good look at their own clans, or maybe mine. And whether or not the title word is an adjective or a verb, it is totally appropriate.

But, this production of a brilliantly named show by Branden Jacobs-Jenkins, is quite an experience. It not easy to make the playwright’s freaks even stranger than our own, but retaining every semblance of reality. There are no ghosts or zombies. These folks are real characters.

Freddie Ashley directed this work, which is staged on a magnificent set designed by the sisters Moriah and Isabel Curley-Clay. It is an old and somewhat decrepit manor house in which the father of the family had lived for many years. He was a hoarder and maybe a keeper of some secrets. He’s passed on and the daughter, Toni (Jan Wikstrom) is getting the place ready for an estate sale and to dump the property.

An estranged brother, Frankie a/k/a Franz (Bryan Brendle) has showed up at an inconvenient moment, accompanied by his fiancé, River (Alexandra Ficken) who, is not quite their type to the rest of the gang. The family includes Bo (Kevin Stillwell) who is a business professional but who has his own problems with which he must deal. A grandson, Rhys (John Osorio), is there, and not contributing much to move things along. Rachael (Cynthia Barrett) has some relationship problems with Toni, but most of the folks also do. The other younger folks are Devon Hales as Cassidy, a young teen who is, in her mind, almost an adult; and Dylan Moore as Ainsley, the youngest of the group and not really into whatever it is they are doing.

The play is very strong in the language department, so is certainly not for the Ms. Prims. And the secrets which come to light relate back to the days of the mid 19th century, when not all folks were treated equally in places such as Arkansas, as well as many other states. It is a very energetic production which runs more than a couple of hours. But, while the final end may seem a little slow in coming, you will be totally amazed at the technical aspects it presents.

For more info just visit them at Actors-Express.com