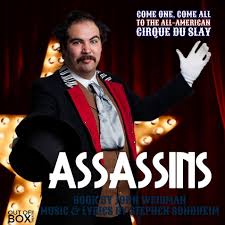 Assassins
Out of Box Theatre
through April 15, 2017

This is a pretty large show for this theatre, but staged like a cabaret.  Sondheim’s Assassins is one he created more than 20 years ago, and it had a somewhat checkered history.   It did make it to Broadway in 2004 and actually won several Tony’s, albeit this is not one of those shows that is going to become a classic favorite.

You do have to give him credit for taking a subject matter that few would find humorous and being able to weave humor into the history.   It is in a carnival-like setting where patrons are urged to come into a hall where they can fire blanks at various presidents, each of whom had been to object of an assassin, although not all of the would-be assassins actually accomplished their aims, no pun intended.

Of course it starts with John Wilkes Booth (Steven Devillers) who we all recall from grammar school.  But, how many of us recall that this piece of work was actually an actor?  Charles Guiteau (Kiernan Matts), who shot Garfield who then died some weeks later from infection.  Leon Czolgosz, (John Coombs) who most of us never heard of; actually shot and killed William McKinley.   And Guiseppe Zangara (Jim Dailey) tried to off FDR in Miami but missed.  He did manage to whack the Mayor of Chicago and got fried for doing so.

And from the pages of more current history we meet Lee Harvey Oswald (Jeremy Cooper, who also doubles as a balladeer) who did in JFK.   Then there is a nut case named Samuel Byck (Dylan Parket Singletary) who wanted to kill Nixon but he crashed first.  And “Squeaky” Fromme (Julianne Whitehead) who took a shot at Gerry Ford;  and an even nuttier gal, Sara Jane Moore (Emily T. Kalat) who took a shot at Ford barely a couple of weeks after Squeaky failed.

Keep in mind that Sondheim created this one, so a few bars sound a lot like Into the Woods, but that one was penned about 4 years later.  In this one, there are ten non-memorable musical numbers which move the action along.  And the music is essential not only because the songs are the plot, but this cast of 15 players can really grab you with their silly antics.

Directed bhy Michelle Davis, with Annie Cook on the keyboard and Tisa McDougald Schuurman on flute and piccolo and Ray Caputo on the reeds.  They’d right there on stage with the players.  Out of Box is easy to get to up near the Big Chicken, with free parking.  The show runs about 90 minutes in one act.  More info at OutOfBoxTheatre.com