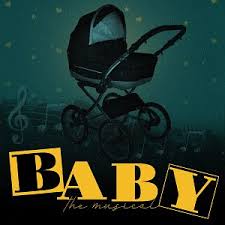 For a small local theatre company, this is pretty large scale production with a cast of 11 players, a six piece band, and working through two dozen numbers which move the story along. It deals with three couples, in different age groups, dealing with the expected affects of a new family member coming to them.

A couple of young music students in their early 20’s have two or more issues. The girl (Abi Sneathen) has become pregnant, but is not concerned about being married or not. As we know, many younger folks now live together for some number of years before they may actually take their vows. Might be a good idea, as you don’t need a divorce if you wish to move on in your life. The boy (Brandon Deen) is more concerned about tying the knot, as he feels responsible for what is about to occur.

An older couple (Lisa Reich & Chris Davis) already have 3 kids and are empty nesters who never thought that she might be with child again in her 40’s There are serious doubts and concerns and possibly considering abortion vs. birthing. Then is a third couple (Kate Metroka & Brian Slayton) who are deeply in love and over the moon with anticipation of their baby’s arrival.

While I can’t tell you who does what and how, there are many issues which come into focus. A woman may not actually be pregnant, a man may not have good sperm counts, one couple has to follow a regimen to help her become pregnant, and more. One of the women in her third trimester becomes the focus of attraction for a load of other women who relate their own experiences to her. Not that she wishes to hear about it. One of the women finally gives birth at a hospital as the story goes to the end.

There were more gents in the audience than I might have expected, considering the theme of the show. While it may be more of a ladies night out gig; it certainly plays well to men who have been down that road and/or respect and understand what life means for a woman these days.

Caty Bergmark directed the show which moves easily through about 2 hours with one intermission. The location is in Sandy Springs right behind Trader Joe’s, and more info is at Act3Productions.org