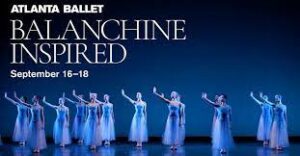 It was George Balanchine who brilliantly defined Dancing as Music Made Visible; and our ballet company did just that last week in appearances at Cobb Energy Performing Arts Center.

With a huge cast of more than two dozen ballerinas and quite a few danseurs they take the stage which is quite stark in that there is no set, to speak of, other than the back screen and a little bit of video clips that are projected as an introduction to the dance.

The ballet starts with George Balanchine’s choreographed interpretation of Tchaikovsky’s Serenade. It was followed by their dance to Sum Stravinsky, by Igor Stravinsky and choreographed by Kiyon Ross. And after the intermission they wound up the action with their presentation of Philip Glass’ In Creases which is an abstract ballet set to the music of two pianos which were onstage, and choreographed by Justin Peck.

With the exception of the two pianists, the orchestra was not in the pit, although the caned music worked quite well. These are tough times and we salute the Atlanta Ballet and other arts groups who feel, as Tony Soprano would have said, to do what you gotta do……

Keep them in your thoughts and don’t miss out on their next offering.