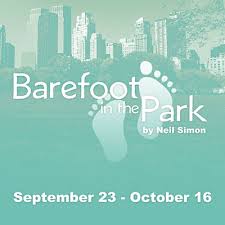 Barefoot in the Park
Stage Door Players
through October 16, 2016

This is one of Neil Simon’s big winners. When it hit the boards in NYC more than 50 years ago, it ran for more than 1,500 performances. And it was made into that film you may recall with Robert Redford and Jane Fonda in the leads.

The story is one that covers just a few days in the lives of the people. Corie (Alyssa Caputo) is just married to Paul (Edward McCreary). She found a flat for them in the city which she thinks will be a good home for them. It has a few problems, inasmuch as it is a six flight hike from the streets, has some maintenance problems, and a weirdo neighbor.

Paul is a lawyer just starting out to try to build a practice, and he may need some more practicing. He’s kind of totally immersed in what he is doing. Corie wishes he could just loosen up a bit and be easier to deal with. Maybe like taking some chances such as parading barefoot in the park.

James Donadio is the not-your-average-type neighbor, Victor Velasco. He’s pretty funny whenever we get to meet him. Corie’s mom, Ethel is played by Ann Wilson. She’s single and Corie gets the idea of trying to hook her up with the nut-case next door. Could such a thing happen? What do you think?

The play is directed by Robert Egizio, and the set works fine for one of those NYC flats that are so small that you have to go out onto the stairs just to change your mind.

A typical Neil Simon work, it may have some problems, but they’re dealt with much humor and provide a very pleasant couple of hours without any politicians talking.

More info and tickets at StageDoorPlayers.net