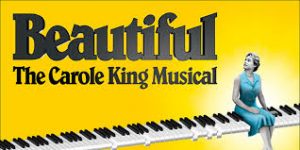 Beautiful – The Carole King Musical
Fox Theatre
through May 29, 2016

The young girl from Brooklyn, Carol Jean Klein, is the grown up star composer, singer and entertainer you know as Carole King. Now 74 and still going strong, she’s been called The Queen of Rock, and has won scores of awards and had plenty of #1 hits in her long career.

She released her life story 4 years ago in A Natural Woman: a Memoir, and a lot of that, albeit not all the not-so-nice-parts, has evolved into Beautiful which opened a couple of years ago and is now touring.

Like Beehive which is all music, this is a compilation of more than 2 dozen numbers, many of which you will recall and want to sing along with as you rock away. With a cast of 24 players and a live band as well as some canned segments, the show moves effortlessly along from her days of getting from under Mommy’s control, to hooking up with hubby #1 at an early age, and the tough times that ensued. But, the production does not get into the abusive behavior, albeit one scene deals with husband Gerry’s roving eyes.

Abby Mueller is Carole King, and Andrew Brewer is Gerry Goffin with whom she hooks up personally and professionally at age 17. Another greatly talented songwriting couple, Cindy Weil and Barry Mann (Becky Gulsvig and Ben Frankhauser) share a lot of the person-to-person scenes through the years. The stage setting slides easily from producers office to sound stage and other venues. For the story isn’t the story, it is the music.

For this is the woman who created numbers such as Will You Love Me Tomorrow, Up on the Roof, You’ve Got a Friend and her signature piece, A Natural Woman. Tickets and info at FoxTheatre.org and you know you can avoid the Park Atlanta cockroaches if you take Marta to North Ave and walk around the corner.