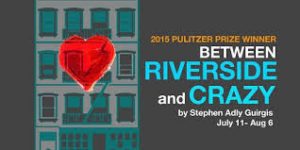 Between Riverside and Crazy
True Colors Theatre
through August 6, 2017

Stephen Adly Guirgis won the 2015 Pulitzer for Drama for this work about a former cop and his somewhat dysfunctional family and friends. Eric J. Little directed this high quality work with a cast of eight well known players.

There is a lot about this play that resonates with a lot of the angst which is permeating our society these days. We start off meeting Pops (Earl Billings) who was a police officer in New York City. He is having a tough time pursuing a case against the department for discrimination, after being shot up by a white cop.

Pop’s wife died and his son, Junior (Keith Arthur Bolden) just got out of jail. They live in a rent-controlled apartment on Riverside Drive in New York City. And the city wants to take back the flat and cancel the rent control lease. And that sort of thing happened a lot in NYC.

Junior’s girlfriend, Lulu (Annamaria Dvorak), and Oswaldo (Cristian Gonzalez), a recovering druggie also often hang out at Pop’s pad. Andrew Benator comes on as Lt. Caro, who used to work with Pops, and is trying to get him to accept a settlement proposal from the city. But, that isn’t going anywhere very fast. The other two players are Diany Rodriguez who poses as a church lady but has another agendum, and Jerri Tubbs, as a NYPD detective who gets called in after some problems arise.

The show is staged on a terrific set by Moriah & Isabel Curley-Clay, and the work is first quality in every way. You do wonder where things are going, and what may happen; but you are not correct. But all will come around in the end, even though the denouement may seem a bit longer than needed.

Staged at the Southwest Arts Center on New Hope Road, which is just off of Cascade Rd reached easily from 285. Like many shows that Kenny Leon has staged, there are racial issues; and that is nothing less than a mirror of the world in which we live.