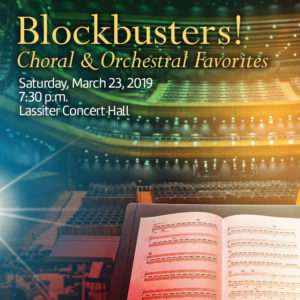 The Georgia Philharmonic and the MOS came together to present an incredible evening at the Lassiter Concert Hall in Marietta. Any suggestion of collusion is just fake news; as they openly appreciate each other and their conductors take turns directing the 140 singers and the full orchestra of more than 50 players, all on the same stage.

The program was mostly oratorio works which are musical pieces that are usually based on some Biblical or religious event. It is a performance for voice and orchestra; but the story is told through the music, and not with scenery, costumes, and action.

The audience of about 800 was really enjoying the evening as they played and sang through a dozen famous works, including the Bridal Chorus from Lohengrin, Handel’s Hallelujah and the one everyone could hum along to, Beethoven’s Ode to Joy from his Symphony No. 9

Dr.Michael O’Neal conducted the MOS as he has joyfully done for 30 years, and the orchestra was under the baton of John Morrison, who has been their music director since 2010. When you consider that these 200+ performers are all volunteers, it is quite incredible.

Most of their gigs are one-nighters, so you need to plan ahead. On May 10th the MOS will present a concert of choral selections from well-known movies. It will be at the Roswell United Methodist Church, where they often perform. More info and tickets are at mosingers.com

And on June 1st, the Philharmonic will present a concert they dubbed “Tragedy and Rebirth.” It features music from Brahm’s Tragic Overture, as well as Shostakovich’s Symphony No. 5 and some music from Navarra. The concert will be at Lassiter Concert Hall. More info and tickets are at GeorgiaPhilharmonic.org