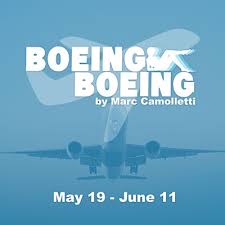 Playwright Marc Camoletti was raised in Geneva of French and Italian heritage.  He wrote a few plays; with this one being his signature work and in 1991 it was included in the Guinness Book of Records as the most often performed French play.  He was clearly influenced by Moliere.  It is a classic French farce.  Every time one door closes, another opens, and anything which could go wrong certainly does.  The story line deals with Bernard, a randy American in Paris (Jacob York) who is getting it on with three different women, each of whom is under the impression that they are engaged to him

Each of them is a “G” girl.  Gloria (Bekah Medford) is an American stewardess working for TWA, Gabriella (Shelli Delgado) is an Italiana stew working for Alitalia, and Gretchen (Suzanne Zoller) is a Fraulein working for Lufthansa.   Bernard has things worked out on a flimsy time schedule arranged to insure that no two of his lasses would be in Paris at the same time. He relies on his abilities to utilize alternate facts, but things don’t always work out as planned.

He is visited by an old school chum, Robert (John Markowski) who gets dragged into the abyss as things start go off-sked.  And through it all the domestic servant, Berthe (DeniseWhelan) strives to keep things in order;  albeit most days that seems a somewhat impossible task.

The show is directed by Robert Egizio, and staged on a set designed by Chuck Welcome.  The costumes by Jim Alford are spot-on, providing some great eye candy; and the two guys provide some fight scenes which take a lot of energy.  I can’t get into details of the plot, because that’s for you to see and enjoy.

I can tell you that the show runs about 2.5 hours, and this is a high energy gig with a zillion laughs in each of the two acts.  It is a great comedy opus.  For more info and tickets visit StageDoorPlayers.net