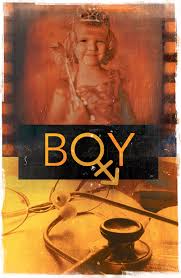 Back in high school we probably learned that females have XX chromosomes while boys are X and Y. What we’re not taught in biology 101 is that occasional mixtures occur where a girl may be XY and a boy may also be not the usual.  And there have been situations in which a person has been changed to the other sex either by desire or without his/her initial consent.

Playwright Anna Ziegler put this script together after learning about a young boy who lost his male appendage when a circumcision went wrong. What were the parents to do. He was a twin to his brother, but would never be quite the same. The doctor (Tom Key) urged the parents raise the child as a girl and to have reconstructive surgeries performed once he reached puberty. So the boy (Clifton Guterman) winds up having the survive the rigors of public school and not truly relating to anybody along his journey of life.

His parents, Trudy (Daryl Lisa Fazio) and Doug (Matt Lewis) are not always on the same page, and neither of them would have wished this hell on earth to anybody. But, what to do is always the stress issue of every day. As he reaches adulthood the child they raised as Samantha, finds attraction to a girl name Jenny (Annie York) and despite the urging of parents and doctor, he will not take the hormone meds to help grow breasts nor undergo sexual transformation surgeries. He denies the name Samantha and renames himself Adam.

It isn’t easy to go after a young woman when both know that the ultimate intimacy will never be possible, but maybe they can deal with that.

This stressful 90 minute show is directed by Melissa Foulger, and they have a talk session with the cast after the show. It’s not one of those you will feel a need to see more than once, nor is it one for kids. But, as the management of the theatre will tell you, it is about human experiences and learning to deal with one another; and that is their main interest in their productions.

Theatrical Outfit is downtown on Luckie Street, and you can get a discounted parking garage ticket when you pick up your tickets. More info at TheatricalOutfit.org