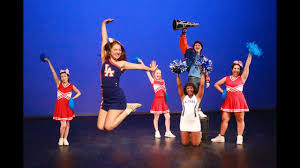 Bring It On: The Musical
KSU College of the Arts
through November 17, 2019

This is another truly professional production by KSU Department of Theatre and Performance Studies, staged on campus at the Stillwell Theatre. This is a show with deep roots to our area for several reasons; most significantly that the premiere of this play was staged at the Alliance in 2011, went to NYC, and has been playing around the world since then. If the music reminds you of Hamilton, it’s because it was composed by Lin-Manuel Miranda in collaboration with Tom Kitt.

There is a cheer leaders group at a white high school where there is jealousy at work for a second-stringer who wants to become captain. And there’s a rap group at a nearby black high school which doesn’t really dig that honky stuff. Until the ousted bitch from that other school gets them into changing their performance Crew into a cheering Squad. Then they face off in the nationals; and as they do so, they all find the true meaning of life.

This is a musical, but like Hamilton, you may not leave the theater humming or singing one of the numbers And if you have an AARP card you may have to ask the person sitting next to you if he knows those words you just missed. What it is though, is a highly athletic and balletic performance by a large cast of young and highly motivated cast. They do tumbles, pyramids, flips and so much more and when some of the girls fly off to the arms of their catchers you are going to breath a sign of relief as they are safely caught.

Directed by Justin Anderson, whose works you have seen on many stages around Atlanta, and with a cast of more than 20 highly energetic and professional student performers, some of whom are the actual KSU cheerleaders, this one rocks. The Lead is Campbell (Annaliese Bauer), who was leading the Squad at Truman High School. But, somehow there was some redistricting and she got reassigned to Jackson High. And in the days when Brown vs. the Board of Education hadn’t taken full effect. The story goes deeper when it comes to be known that her competitor, Eva (Danielle Lorentz), happened to be the daughter of a woman on the board which arranged the redistricting. Kind of brings to mind parents who bribed the way into UCLA for some of their “athletic” offspring.

If I had to pick one of the energetic cast to single out as a scene stealer it would have to be Courtney McCullar who plays Bridget, who seems akin to Tracy Turnblad in Hairspray. You just can’t help rooting for her.

Will the young folks enjoy it? For sure, and every seat in the house was enthralled. They are pretty much SRO for remaining performances, so reserve you tickets now at KSUtheatre.com