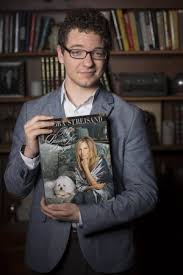 While many of us may not be great fans of one-actor plays, this one breaks the mold in a really funny fictional story of a young out-of-work actor, who winds up tending to a hoard of stuff in the basement of a huge Malibu home of Barbara Streisand.

Elliott Folds is Alex, the poor guy who winds up spending his days and hours in a basement, never being asked up to the grand manor house. He has a partner-friend, Barry, who we don’t meet. But Elliott plays several characters including Barry, Barbara and her estate manager, Sharon.

Paul Conroy directed this show with Elliott Folds, who also played the role when it was staged at Art Station. It is a static set that seems to move quite a bit, as you hear several voices coming out of one mouth. It runs about 80 minutes, and it just amazes me when one actor can remember all those lines, and some of us can’t recall our phone numbers.

OutFront is downtown at 10th and Brady Streets, with plenty of valet parking. More info at OutFrontTheatre.com; where you can also get info on upcoming events for youngsters as well as the next season schedule.