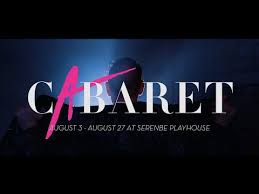 What good is sitting alone in your room when you can come hear the music play, in a first class production of Cabaret. Brian Clowdus, founder of the Serenbe Playhouse actually takes the stage in this one as the Emcee, and what is even more exciting is that Molly Tynes shares center stage with him as Sally Bowles. Brian and Molly have been best of friends since college days and played these roles more years ago than they probably wish to admit.

The show is staged out of doors with cabaret style table seating as well as general admission tiers. Actually, the higher up seating may be even better as you have totally unobstructed views. The cast of 20 players are in terrific costumes since they are working at the Kit Kat Klub. The Klub is a burlesque club and the choreography is right out of Radio City. Heidi Cline McKerley plays Frau Schneider and Robert Wayne comes on as Herr Schultz.

Lee Osorio is Bradshaw, who is just a visitor at the wrong time and place, and Deborah Bowman is Fräulein Kost, and Edward McCreary is Ernst Ludwig, who symbolizes the political situation in Germany in 1929. The show moves along with live music from a 12-piece band under the baton of Chris Brent Davis.

Yes, the show is performed out of doors, but the staging is terrific, the props move in and out with greatest of ease, and the lighting and special effects are first class. Kind of brings to mind some of the shows you may have seen in theme parks.

The venue is easy to get to, albeit it is a bit of a schlep if you live north of town. And, the weather can be a concern. However, the seating is comfortable, and you can bring an umbrella if you wish; or even buy rain insurance at their website. Bottom line is that it truly is worth the risk, as the rewards are first class.