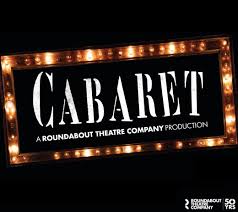 This version of Cabaret is staged by the Roundabout Theatre Company and is on tour to various locations with a large cast and great production qualities.

You’ve probably seen Cabaret at least once before and will recall the opening number Willkommen, and the theme song Cabaret.  It is set in Berlin in the early 1930’s when the Nazis were just stating to wreak havoc on the their country, then the world.  It was a time when the cabarets such as the Lido were THE hot spots in towns like Berlin, Paris and Amsterdam.  It was a time when rules were starting to determine what people could do or not do, and they didn’t have to be reasonable or humane.

But, in these days before WWII really broke out, brothels, clubs and night life were rampant.  Randy Harrison is great as the Emcee and part of the Kit Kat Klub.   He’s eye candy for many in the house, as are the girls of the Kit Kat Klub.  Alison Ewing played Sally Bowles on opening night, and she was spot-on.

The story is about an aspiring scrivener from the States who comes to Berlin to do a manuscript he hopes will sell.  He’s not doing very well plying his craft, but hope springs eternally.  The writer, Clifford, is played by Benjamin Eakeley.   The story line is how he gets sucked into aiding and abetting some Nazi guy, finds the truth of what is coming, and how he should act, and the story goes on . . . .

Thankfully, this production has played down the Nazi aspect a wee bit.  There’s but one guy with a Swastika on his arm, and no horde of thugs in black military uniforms.  But, in the uniform department they get a prize for the ladies of the Klub.  Their skimpy costumes wow the audience, and they are quite talented as they are also musicians in the on-stage band.

I suspect that students these days are taught little about WWI and WWII and know little about National Socialists and Communists or other groups not situate on our shores.   And most of us are quite eager to get through the political garbage being downloaded this final week.  Let’s hope we’re not headed for difficulties in the future.

The show is very well performed.  Sets, music, costumes and props are very good, the score is a classic, and the nastiness isn’t all pervasive.  They’ve toned down the train ride in the final scene, albeit those of us with some history realize what’s going on.

Tickets and more info at FoxTheatre.org