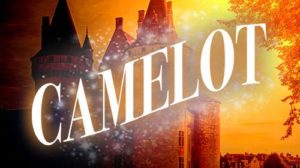 It’s 60 years since Lerner & Loewe’s Camelot hit the stage, and it is so spot-on these days when we witness the world around us and search for ways to attain honor, justice and peace for all. For it was King Arthur (Corey James Wright) who, with the help and input from Guenevere (Lyndsay Ricketson) figured out to build a round table where each knight might have an equal seat at the table. Not sure we have one like that in the White House.

The original show didn’t have an easy start, even though it did bring Richard Burton, Julie Andrews and Robert Goulet to stage center and they brought down the house. It is a show that today runs maybe 2.5 hours, but it was once even longer. You will meet Arthur and Guenevere by the tree in the forest, and they do become wed. Arthur is somewhat moved by the magician, Merlyn (Claudio Pestana), and often looks to his old aide, Pellinore (Greg Hunter).

And, you do recall that Sir Lancelot comes to England to become a Knight of the Round Table. Lancelot (J D Myers) and Guenevere have eyes for one another but try to avoid any hanky panky. At least until late in Act II. For it is then that a bastard son of Arthur, Mordred (Daniel Pino) shows up with a plan of his own to disrupt the realm and seize all power. Sound like anything you hear today?

Directed by Mira Hirsh with a live orchestra under the baton of Paul Tate, this is another really Broadway quality production by this local house. They deal with equality, help for the simple folk, peace vs. war, and standing for right not just might. If only it could be made a requirement that anyone running for office read the original story by T.H.White, and sing along with the cast on stage.