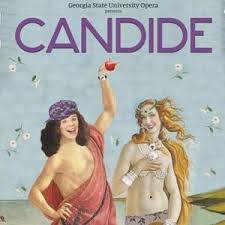 Candide
Rialto Center for the Arts

Leonard Bernstein’s score for Candide is undoubtedly one of the 20th centuries most respected and enjoyed. The story line is based on the work of Voltaire. Most of us haven’t actually read any of Voltaire’s works, even though in his 84 years on this planet he published more than 2,000 books and pamphlets.

Voltaire was a nom de plume for a lower elite class chap who always wanted to follow his own map through life. He was a philosopher, and even though France was a Christian nation, he felt that religions were control devices, and that all of us are alike.  He denounced leaders of all sects, saying they “…rise from an incestuous bed, manufacture a hundred versions of God, then eat and drink God, then piss and shit God.”

And, he did get in the face of the royalty and the priests and at one point he actually spent 11 months in a windowless solitary cell at the Bastille. So, in Candide the Opera his attitude towards life vs. death takes center stage. Candide (Ethan Michel) is that nomadic cavalier who falls hopelessly in love with Cunegonde (sung by Joanna Burrell and Katie Lee, on different dates). The story takes the principals from France, to Prussia, the Netherlands, and even Colombia, as the score supports the different venues in the way it is composed and performed. People live, people die, people live on, etc.

What was truly magnificent about this presentation was the collusion of five groups all brought together by Carroll Freeman. The GSU Orchestra under the baton of Michael Palmer was right at stage front where you could see every move. The University Singers, or more than 40 students were conducted by Jennifer Sengin, and the GSU Players and Our Song group also took part in the production. And, the Kennesaw State University Opera Theatre brought 15 more to the stage under direction of Eileen Moremen.

If you don’t know the Rialto Center, you should check them out. Right downtown, easy to get to if you avoid Centennial Park, and free parking next door. They bring many fine events to us and you can get more info at Rialto.GSU.edu