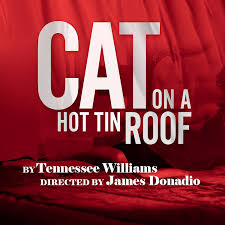 Are our lives a reflection of the world in which we live, or is it the other way around? If we accept that any real dictionary should have as a definition of “dysfunctional” to “see family” then you can understand where the weirdos in Tennessee Williams’ plays come from. His mother was often in zoo-zoo land, his father was abusive and was much closer to his brother than to him, and his sister Rose, had been diagnosed as schizoid and spent most of her life in an asylum. And, Williams was a depressed alcoholic homosexual. Well, HELLO!  Meet the family in this play.

Kate Donadio MacQueen as Margaret and Joe Sykes as Brick, dominate the stage for the first hour act. He’s drowning himself in booze, and is not at all inclined to intimacy with his wife. John Maxwell is Big Daddy, who is not a happy camper. He’s got medical issues, family issues, and is sitting on a fortune in cash and property that has to pass off to a bunch of folks he would prefer to ignore.

Big Mama is played by Karen Howell, and she is one who seems to have some problems dealing with reality, when the reality doesn’t offer the outcomes she would prefer. I figure that should remind most of us of somebody in our respective families.

The cast includes Kelly Chris as the sister, Mae, Topher Payne as the brother, Gooper, Jacob Jones as the preacher man and Peter Hardy as the doctor with the bad news. James Donadio directed this work and did a fine job. The play won the Pulitzer in 1955, and maybe it was because things were going pretty well in that year. But, this is not an easy one to handle.

The static set works for the whole show as players come and go. There are a couple of laughs but this isn’t a comedy in any sense of the word. There is a load of yelling and angst to deal with, and it certainly is not for the kids. For those of us who’ve been dealing with family members final days, or other difficult times, it can be a difficult couple of hours.

While this is not one of those works where all comes out right in the end, it does explain where the title comes from, and helps one to understand that they are not the only ones dealing with a mountain of you-know-what. Very well done and easy to get to with plenty of parking and goodies. One suggestion is try to get seats closer to the stage so you don’t miss a line.