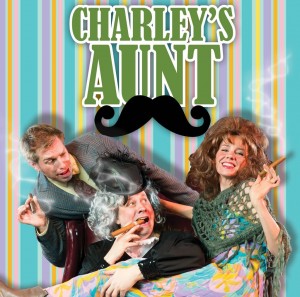 After their extraordinary run of Calendar Girls, the Georgia Ensemble has come back with another oldie winner. Charley’s Aunt, by Brandon Thomas is one of those VERY rare successes. This work, which premiered in 1892 is a sort of modern day Shakespeare opus. It started off as a production of the D’Oyly Carte Opera Company and the first run in London included more than1400 performances.

Since then it has played in many languages and formats around the world, including a great Broadway run, and a 1941 film with Jack Benny as the Aunt; and possibly the most remembered version being the adaptation as the musical, Where’s Charley?, starring Ray Bolger.

With a cast of 10 players, the show is sort of a Moliere type of thing where one door opens as another closes, and whatever can go wrong does in fast time. We start off with a couple of undergrads at a posh college who have interests in a couple of damsels. Joe Sykes and William Webber play the guys, while Rachel Garner and Angelica Spence are their love interests.

There is a problem inasmuch as neither girl is free to enter into a relationship without the approval of a gent who is the uncle of one and the guardian of the other. Steve Hudson plays the older guy. And the girls can’t even stay and visit at the guys’ pad without a chaperone being present. Charley has his aunt from Brazil coming to visit, and she would fit in quite well.

Oops! His aunt sends a message that she shall not join them. What’s a gent to do? Their buddy, Lord Babberly (Hugh Adams), gets drafted into posing as the dowager aunt. Not exactly what he had planned for that evening. He’s not at ease in a long skirt which hides his trousers and male footwear. And, it gets even more weird when he gets hit on by Sir Francis (Scott DePoy) who understands she is a wealthy widow, while he is now short of funds.

So now you get the idea. Except who would think that the real aunt, Donna Lucia D’Alvadorez (Joanna Daniel) does show up, and some of the gang who know not who she is, introduce her to Babbs as the alleged Donna. Oy!

A very well staged production directed by David Crowe, in three acts, running about 2.5 hours; it is a night of pure pleasure. Nobody gets killed, and in the end all comes out right. So you know it must be a work of fiction. Full info ant tickets at GET.org