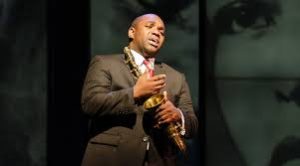 This is not your usual type of operatic production. This opera about the famed sax player is actually set in a cabaret club on Ponce. Le Maison Rouge is at 716 Ponce and is NOT your grandmother’s setting for a major production. But, go with the flow, as the objective is to be multi-cultural, and relative to the actual experiences of the theme of the opera.

Charlie Parker, a/k/a YardBird, was only 34 when he died, and he was an icon for the growth of black musicians playing in clubs where everybody was welcomed; especially if they bought drinks. He was heading to Boston when he stopped to visit a wealthy white woman in NYC, and it was there that he passed away. Many stories got out about how the rich lady tried to hide his death and her friendship with a black man.

Not that Charlie was a symbol of morality. Like many of his time, he knew quite a few ladies, had a deep appreciation of alcohol and drugs, had been married several times, fathered children, left town, etc. The one thing he was truly addicted to was music and his saxophone. If he accomplished anything it is that his musical legacy lives on, as Birdland.

This is the work of Daniel Schnyder for the score, and Bridgette Wimberly for the libretto, and it premiered just 3 years ago. Clinton Smith conducts the orchestra and seven singers take the stage. Charlie is played alternately by Martin Bakari and Joshua Stewart. The Baroness Pannonica is Gina Perregrino. The last wife, Chan, is sung by Rachel Sterrenberg. And three of Parker’s family are sung by Angela Brown, Chrystal E. Williams, and Maria Valdes. And Dizzy Gillespie (Sidney Outlaw) shows up as he and Charlie were friends and both heading for the stars.

This is an Opera Nouveau so if you are expecting a bunch of jazz riffs, and be-bop numbers, you may be on the wrong page. For it is about a man, fighting his devils, trying to get somewhere in life, and it being cut short in 1955. In days when we are seeing many shows that deal with families, integration, and the rights of people of different races and sexes, it seems very appropriate.

It is another well done presentation by our Opera company, and more info is at AtlantaOpera.org