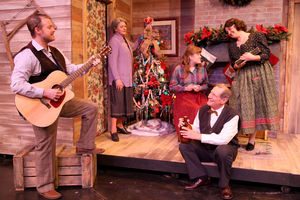 Playwright Phillip DePoy was really taken by the works of Celestine Sibley, who wrote for the Atlanta Journal. Celestine was a small town girl who watched with very mixed feelings as Atlanta’s population exploded from less than million to more than 4 million. We can attribute a lot of that to Hartsfield-Jackson and usually comfortable weather.

But, as we get stressed with the traffic jams, she was watching the local lands getting built on akin to what’s going on in each suburb of the northern perimeter.

Shelly McCook directed this cast of five players, which includes Scott DePoy as Ollie Reeves and Paige Mattox as Celestine. Karen Howell is Patience, even when she is not so patient; and Kate Johnson is Beth. Jeremy Wood plays Dave and strums along to provide background music.

In Act I the action is taking place in an urban area, but by Act II they’ve all scampered up-country to the cabin in Sweet Apple, which may just be in the days when parts of north Fulton County were still agricultural.

It’s not your average Christmas production, as it sees and portrays life through different lenses. But, all comes right in the end and they all find a meaning in the holiday.