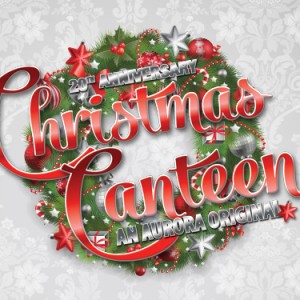 For the twentieth year the Aurora brings back to stage their Christmas Canteen, directed by Anthony P. Rodriguez with a cast of nine players with great talents.

Jen Macqueen, Lyndsay Ricketson and Diany Rodriguez are the female principal players alongside Travis Smith, Brandon O’Dell and Brian Walker. Each of the six sing, dance, and even play one or more instruments in some numbers. Not that there isn’t a 5-man live band onstage with Ann-Carol Pence directing and at the keyboard.

T’Arica Crawford, Benjamin Sims, and Laura Spears are apprentice company members who also work into some of the numbers, as the show moves along with 40 numbers being done. It isn’t like Scrooge & Marley or the Andrews Sisters. It is purely a cabaret sort of show, the type you might love to find on some cruise ship this time of year.

The show may be in it’s 20th production, but it is always changed a little bit, here and there. Their dance numbers, choreographed by Jen Macqueen are just superb, and the humor in some of the songs such as Hobo Christmas Train and GI Jive are fun.

Considering that we just celebrated Veterans Day, and so many of our men and women can’t be with their families on the holidays; it is so appropriate that they always do the Armed Forces Medley and salute those who have served and are in the audience.

Bottom line is that it is just a feel-good evening. A special treat is that there is a collection of beautifully decorated Christmas trees in the lobby and you are invited to bring food donations which may be left at any of them. After all, ‘tis the season to be jolly.

For times and tickets visit them at AuroraTheatre.com