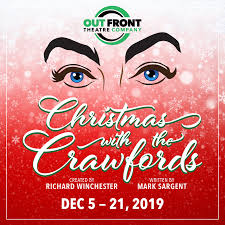 Christmas with the Crawfords
Out Front Theatre
through December 21, 2019

Joan Crawford was an actress, egomaniac, booze hound, and a real piece of work. She had been a success in the early film days, and had adopted some children who were perhaps not quite convinced it had been an easy voyage. Crawford was a difficult mother-type who insisted they do chores, instantly obey her and always have the last words in every discussion; which would be “yes Mommie Dearest.”

This work may be derived from a book that her older adoptee, Christina Crawford, published about 40 years ago. But, it isn’t necessarily all based on facts. The stage is set at the Crawford mansion which lies next door to Cary Grant’s home, where a Christmas party was being staged. Without Joan and the kids being among the guests.

Joan (Emily Nedvidek) has a visitor, reporter Hedda Hopper (Jaymyria Etienne) who is ready to do a live radio interview. The kids, “Tina” (Michael Vine) and Christopher (Abby Holland) are the props for Mommie Dearest. Some unexpected visitors including Carmen Miranda (Rosa Campos), Judy Garland (Annamaria Dvorak), Gloria Swanson (Blake Fountain) and Ethel Merman (Lynn Grace) show up thinking they are at Grant’s gala. Oooops. Even the Andrews Sisters show up with Trevor Perry as one of the trio.

Nick Silvestri is onstage as a Liberace type piano player who gracefully works the cast through 19 seasonal numbers. Directed by Jennifer Alice Acker, the cast brings down the house. You know who is in drag, but everybody is into the laughter and the songs and silly screw-ups.

This is another really staged production by OutFront Theatre Company. Located on Brady Avenue at 10th Street, it is a traffic nightmare to get to on game days. But you might go early, grab a table at Donetto, a posh Italian bistro across the street and enjoy a fine meal. They have a fine menu and wine list and it can really make the night even better.