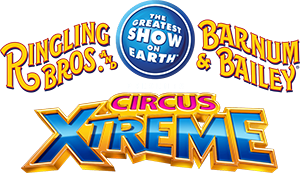 at Inifinite Energy Center
through March 5, 2017

The Circus has come to town.  Hooray.  But, sadly it is the final curtain for they will pull the plug in a couple of months.  Things have changed quite a bit in the past decades.  Years ago the circus came to town on their train, ran a parade down Main Street, had side shows and gaming shills, and managed to entertain as well as offend some folks.  The freak shows went away many years ago, and the elephants are history.  But, the flair and the sense of danger pervades.

In Xtreme, they bring great set of costumed performers, a full live band on stage, and plenty of action.  Some of the acts are Old School, such as the woman being shot out of a canon, the trainer with 13 tigers, the high wire and slack wire acts, and the aerialists.

The group of performing poodles gets plenty of laughs, and some of the opening numbers are kind of “back at you” to Shen Yun.  Then you also get to see some bikers doing numbers which look like the skateboarders in their championship competition, and a German Wheel act where you think you see a Brodie.  The important thing is that it is theatre, in the round, with performers, music, jokes, and so much more.

Forget about the 3-ring style of circus.  That’s gone and today they perform in one ring, which is really the base of the arena.  There’s no tent, or Roman Riders on horses these days.  But as we say Goodbye and Much Thanks to this huge piece of history, we’ll all recall our first visit as a child, and this final one which is almost akin to the passing of a friend.   Everyone from 5 to 95 had a good time and they were just about sold out with more than 12,000 viewers on opening night.

More info and tickets at InfiniteEnergyCenter.com