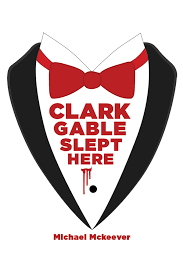 This wild opus by Michael McKeever is a present day story of an egocentric talent manager who stumbles into some problems in a boutique hotel with a suite they proudly present as one in which Clark Gable had slept.

Clark Gable had quite a sex drive and had more trysts with women than many of today’s politicians. Yet there was one with Billy Haines, a star of the 1920s, and Haines came out about it. It was also confirmed by Joan Crawford, who was a friend of both of the guys.

A dead prostitute is found in the ritzy suite which had been rented to an actor who was up for a Golden Globe Award. The ceremony was that evening, and the actor had left the hotel. The maid, Estella (Jess Arcelay) came in to take care of the room when she discovered the motionless gent, Travis (Spencer Kolbe Miller), on the chaise. She has called in the hotel manager, Gage Holland (Ben Thorpe), who is frantic, as finding a corpse in his place would not make good publicity.

And he winds up with the actor’s agent, Hilly Hilliard (Bryan Brendle), who has great concerns, as his client would not benefit from the news hitting the tabloids. So he has called in a high-power fixer-upper, Morgan Wright (Wendy Melkonian) who knows who to call to take care of anything.

And if you think that nothing could go wrong, just think again. For this riotous romp is one in which anything that could go wrong does so. And the show is on a fine set with this great cast who exude energy in every minute of this one-act work. Directed by Paul Conroy, this is a story line that could be occurring today in TinselTown and is one you will really enjoy.

But also know that this is not one for the kiddies, or those who recoil at the use of the “F word” as the universal modifier. Art Station is in Stone Mountain Village, easy to get to and free parking and a good bar and art gallery. More info at ArtStation.org