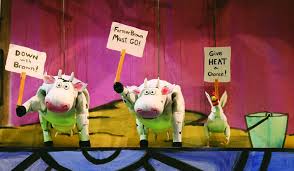 This is a terrific one for the kids this summer. The children really get into the story line; as some of them may know the book by Doreen Cronin from which this was adapted by Jon Ludwig and Jason Hines. Jon Ludwig also directs this show.

It is a story about some cows who want blankets for cold nights, and when farmer Brown says no; they start to revolt and they learn to type notes, etc. As the resistance goes on their campaign is joined by other animals from the farm, until Brown gives in and all comes right in the end. No politicians are hurt and there is no violence.

Dolph Amick wrote the music for this one, and he is onstage performing it, while four puppeteers do their thing. The kids pick up on the words of the songs and they all join in as the play progresses.

Mandy Mitchell, Amy Sweeney, Brian Harrison and Tim Sweeney manage the stick puppets with many fast changes and adaptations. The old folks enjoyed the show as well, just being around that many younger people who were having such a great time.

The Puppetry Center also offers the children the materials and instructions to create their own puppet; and there is also the museum which is truly incredible. Were Jim Hensen still with us, he’d be elated. There is plenty of free parking at the Center for Puppetry Arts which is at 1404 Spring Street. More info and show times at Puppet.org

And also keep in mind that before or after the show you can take the kids to the High Museum which is hosting a show from the Victoria & Albert Museum of the drawings done by A. A. Milne when he created Winnnie-the-Pooh.